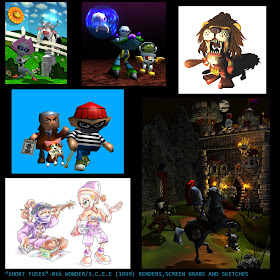 These were created for a game that never saw the light of day "Short Fuzes".

In 1997-98 I joined a small outfit of ex-Rare staff in their new startup team "8th Wonder", we were one of Sony's not-quite-1st party teams, which meant we had plenty of visits from then SOE bossman Juan Montez, but none of the swanky offices and perks that the likes of Psygnosis had. The game itself was quite a nice little Bomberman clone, and not suprising, considering the lineage of Rare Studios,there were shades of Atic Atac in there too. All hi-res, no mean feat for the Playstation at the time.

Unfortunately, for various "business/bonus reasons/excuses" Sony pulled the plug on it,when it needed a solid three months extra work on it.  A shame as it was a nice little game.

We all moved onto bigger and better things, but the short time we were together as 8th Wonder are some of my favourite times in the games industry*

*except for Tamworth's shoddy bus service, the Friday washing up rota and waiting for certain individual to do his daily dump before the rest of us could use the lavvy.
Jamie Hemming at 20:07
Share